The local media has been covering the upcoming visit of the 14th Dalai Lama to Orange County, and UCI, on July 5-7, 2015. Among the programs planned for this three-day series of events is a celebration of his 80th birthday. The Dalai Lama has been on the UCI campus at least three times before. He was here in 2004 and 2011. The UC Irvine XIV Dalai Lama Endowed Scholarship was established in honor of his 2004 visit, and he was here in 2011 for the scholarship celebration, again.

Ward Ritchie (1905-1996) was one of the premier printers, book designers, and printing historians in Los Angeles in the 20th century. In his long and distinguished career, he designed, printed and published hundreds of books. Upon retirement in 1972, Ward Ritchie and his wife Marka moved to their summer house in Laguna Beach, on a slope above Emerald Bay. Ritchie bought an 1835 Albion hand press and had it installed in his studio in their home.

A new collection documenting the California Constitution Revision Commission, the organization charged with editing the lengthy California State Constitution from 1964-1974, was recently deposited at the UCI Libraries.  The collection comes to Special Collections and Archives from the Orange County Public Law Library (OCPLL), where Judge Bruce W. Sumner, a member of the Orange County Superior Court and commission chairman, donated the materials in 1983.

We're excited to announce the availability of a brand new addition to our regional history collections:  the G. Lewis Baldwin papers (MS-R169).  A minimal finding aid for the collection has been added to the Online Archive of California. 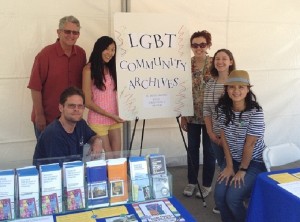 The UCI Special Collections and Archives team at OC Pride. We had a great time! 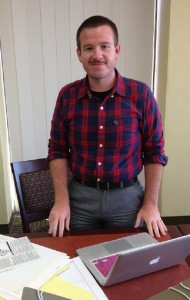 Below are minimally processed archival collections related to local and regional history that have recently been made available for researchers. For additional information please contact the Special Collections and Archives staff at spcoll@uci.edu or (949) 824-3947.

Today's blog post is written by one of our talented student employees here at UCI Special Collections & Archives, Deborah Lewis.

One of the most recent additions to our ever-growing collection of LGBT-focused materials at UCI Special Collections and Archives is the Robert Gentry papers (MS-R167). This collection includes the political and professional records of Robert F. Gentry, the first openly gay elected official in Southern California and the first openly gay mayor in the state of California.
Subscribe to OC Regional History