For the past semester, I have been processing the Tony Lam papers. Tony Lam is significant in the history of Orange County and has dedicated his professional and political life to the local community. In the spirit of this election year, I thought I’d share some of my favorite items from the collection: Tony Lam’s campaign materials.

In 1992, Tony Lam won his City Council election and became the first Vietnamese American elected to public office in the United States. He served on City Council in Westminster, California for ten years, giving a voice to the populous Vietnamese American community.Lam’s campaign materials were distributed in both English and Vietnamese. While promoting himself as a candidate, Lam worked to ensure that members of the Vietnamese American community were registered to vote. He got the backing of the mayor, local police, and Westminster housing association and promised to lessen gang-related crime and to ensure the opinions of the populous Vietnamese community - nearly all of which were refugees following the Fall of Saigon - were heard and considered in local politics.   After their own escape from Communist Vietnam, the Lam family briefly lived in Guam at Camp Asan and at Camp Pendleton. Lam volunteered at both of these camps, helping over 150,000 refugees. Eventually, the Lam family settled in Orange County. In Westminster, Lam helped design and plan the Little Saigon district, was a founding member and President of the Vietnamese-American Chamber of Commerce, and organized the United States’ first Tet festival.

In 2005, he was included in The Orange County Register’s publication 100 People Who Shaped Orange County and was presented with a Golden Torch Award at the Vietnamese American National Gala in Washington, D.C.Lam’s years in public office were tempestuous: racial tension, gang violence, and the 1999 Hi-Tek protest eventually impacted Lam’s decision to retire from public office in 2002. The Tony Lam papers (MS.SEA.057) will be open for research in mid-May. To view the collection, please contact Special Collections. 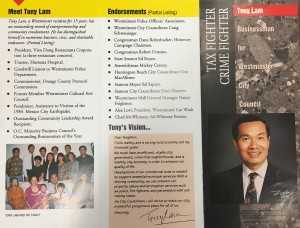 A pamphlet from the 1992 election introducing Lam to the voters. 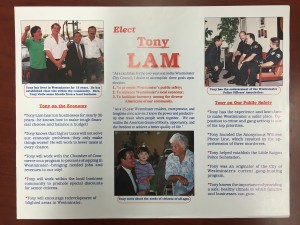 A pamphlet highlighting Lam’s police endorsement and introducing his platform. 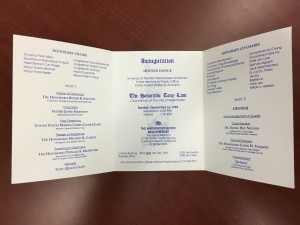 The program from Lam’s inauguration dinner celebrating his successful campaign. 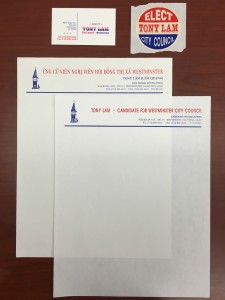 A business card, sticker, and examples of Lam’s campaign stationery.